Walking with the Ancestors

“My mother once told me, sometimes she felt like she ‘didn’t have no life.’ That statement, made with so much honesty, conviction, and passion, yet free of even a hint of self-pity has throughout my career been one of the guiding principles of not only how I live my life, and relate to other people, but has also profoundly influenced the philosophy of my art.

In the early nineteen hundreds when she grew up, life was a struggle. Survival was day-to-day and filled with the perils of discrimination, poverty, illiteracy and a host of other dangers inherited from a lifetime of being poor, black and undereducated. Yet she survived and passed her legacy of love, compassion, hope and a sense of ‘doing the right thing’ onto her children.

My work finds its foundation in her legacy. It refers to the trials of youth and the struggles of the aged. It seeks to speak to, and for those, with no voice. My work embodies compassion, hope, justice, and perseverance— concepts I learned from my mother.”

Opening reception is on Friday, June 3rd from 6 -8PM. Show will be open Tuesday – Saturday from 11AM – 5PM and admission is free. 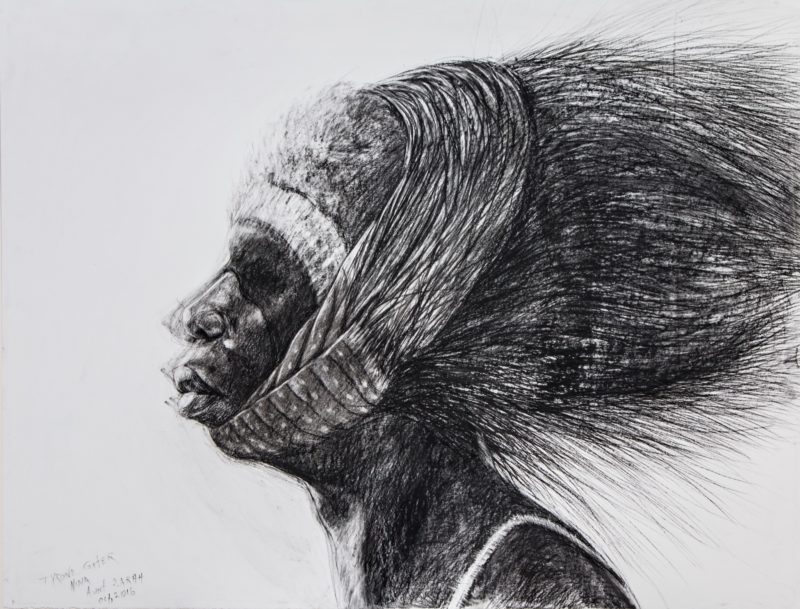 In a career that spreads across two continents, Tyrone Geter has built an international reputation as a world-class artist, painter, sculptor, illustrator, and teacher. Recently retired associate professor of art at Benedict College in Columbia, Geter grew up in Anniston, Ala., during a time defined by strict segregation laws and social injustice. Anniston was a site of numerous acts of racial violence during the Civil Rights Era. The immediacy of these events and an inherited legacy of spiritual strength and fortitude against all the odds inform and shape Geter’s work.

He received his Master of Fine Arts from Ohio University in 1978 with an emphasis on painting and drawing. An exceptional draftsman, his portraits are sensitive, timeless, and masterfully executed. Their power, displayed through their expression, gesture and adornments, seem often suspended in an otherworldly environment. Equal to the history his figures embody, they also speak of a spiritual world overflowing with compassions and empathy. In this regard his work is uniquely distinctive.

In 1979, Geter relocated to Zaria, Nigeria.  For seven years he lived, drew and painted among the Fulani and other local peoples of Northern Nigeria. During this period, he created numerous paintings that captured the richness and depth of the cultures of the region. He describes the experience as an experience that taught him “to understand the nature of life in a society where life and nature are sometimes both hard and cruel.” Further, he experienced “a lesson in the creative process that no art school would ever teach me.”

Those years in Nigeria proved to be a turning point in his development and the most important influence in his life and art. In 1987 he returned to the U.S. and a teaching position at the University of Akron, where he transformed his experience in Nigeria into the most powerful work of his career.

His work has been exhibited at the Columbia Museum of Art, Florence County Museum, and WaterFront Gallery (Charleston) in South Carolina, and Center for Afro-American Artists (Boston), Butler Institute for American Art (Youngstown, Ohio), Hampton Institute College Museum (Hampton, Va.), and Museum of Fine Art (Boston) to name a few. His honors include placing first at Moja Arts Festival and in the Robert Duncanson Award from Taft Museum (Cincinnati), and he received an artist fellowship grant from Foundation for the Arts and Humanities (Boston) and a grant from Columbus (Ohio) Arts Council.